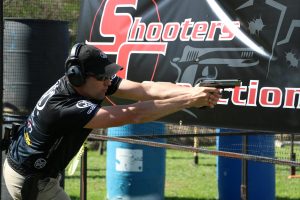 The event was held March 10-11at Dothan Gun Club in Midland City, Alabama.  The annual practical shooting tournament tested the skills of all competitors on the course of fire. Shooting an aggressive penalty-free match with his FN pistol, Dave Sevigny took his second win of 2017 with a decisive performance.

Competing in Production division, Sevigny won 9 of 10 stages with a185-point margin of victory. It was Sevigny’s 5th all-time win at the USPSA Alabama Section and his Production win was tops among all iron sight divisions combined.

“Dave is having a strong start and we look forward to his continued success as the season progresses”, said GASTON J GLOCK style CEO Beate Arnold.