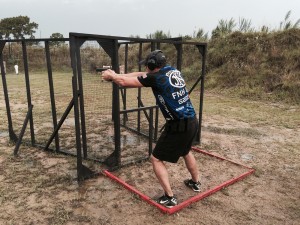 The 300-round, 18-stage course of fire featured stationary and moving targets and knock down steel placed throughout an assortment of obstacles to solve each stage.  “The field was strong. I had to stay on the throttle all the way with that kind of talent here”, said Sevigny.

Competing for the Standard title were four past IPSC World champions and several top level Grand Masters in IPSC and USPSA. Final results showed Sevigny won by a dominating margin of nearly 5% over 2nd place. The match puts Sevigny in the lead for US Standard team selection at the 2017 IPSC World Championship in France.  In 2014, Sevigny was part of the U.S.A. gold winning team at World Shoot XVII along with adding an individual bronze.

“Dave has long established himself as one of the greats in shooting sports and we once again congratulate him on his latest National championship victory”, said GASTON CEO Beate Arnold.

GASTON offers a variety of shooting products designed for the competitive shooter, including the range bag used by Dave Sevigny. Visit the GASTON website for a full view of knives, hunting and shooting clothing and line of accessories.