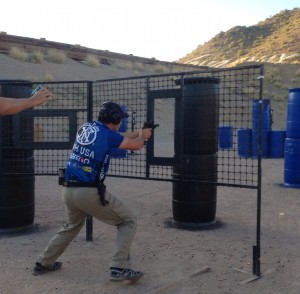 Sevigny won four stages outright and scored 1515 of 1545 available points without any penalties to win the Open Division Championship.  In seven appearances at the Area 2 Championship, Sevigny competed in the Limited, Production and Open Divisions, each resulting in a win.

“This club is undoubtedly one of the most experienced and talented groups in the country. I always look forward to coming here to finish a season,” commented Sevigny.

During the season, Sevigny competed in USPSA, IPSC, Steel Challenge, Pro-Am and Bianchi Cup. “We are proud that Dave earned his 17th win of the season. He demonstrated once again that he can win or place high in any sport or division he chooses to compete in,” remarked Beate Arnold, CEO of GASTON J GLOCK style LP.

Visit http://www.facebook.com/GASTONGLOCKstyle to get the latest news on GASTON J. GLOCK style LP and their sponsored Sevigny Performance Team.