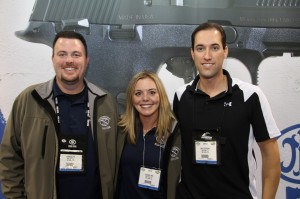 President of OMB Guns John S. Ralph III stated, “Dave is a humble, polite champion that comes along once every 20 years. He demands high performance standards and already has provided us with valuable feedback to share with our manufacturers. At OMB Guns we value the synergy of world class shooting, dedicated work ethic and powerful sales experience to be the best.”

Dave Sevigny quickly rose to the top of practical shootings elite competitors. As an 11-Time National Champion in the most competitive practical handgun shooting league, Dave is the only person to win a National Championship in the United States Practical Shooting Association (USPSA) each year since 2003. In 2011 alone Dave won the World Speed Shooting Championship in Iron Sight as well as the National Championship for the second consecutive season, Pro-Am Championship in both Professional divisions for the second consecutive season and won the 1911 Single Stack Classic/USPSA Nationals to push his career major championship total to over 170 wins since 1999. “I am happy to be part of this hardworking team committed to be the best. Providing feedback on products, training and competing with OMB Guns is something to look forward to,” says Dave Sevigny.

The “Shift Change” striker-fired FNH FNS pistol is currently available in 9mm and .40 caliber. The FNS pistols feature fully ambidextrous controls including options with or without an external thumb safety, interchangeable back straps to suit varying hand sizes, and a low bore axis for greater control. The FNS is available at comparable prices to other pistols in its class. Additional models and configurations from FNH USA are coming soon.

2 thoughts on “OMB teams up with Dave Sevigny”