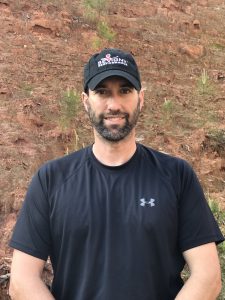 Working as a blue collar employee in the machine trade, Dave began recreational pistol shooting in his early 20’s.  The time on the range with a commitment to be the best would lead to a change in his career path. During his first two seasons in competition, Dave demonstrated his high level of skill, advancing to become one of the most accomplished and respected handgun shooters in the world.

Dave is a five-division USPSA Grand Master class competitor who has won major championships in Production, Limited, L-10, Single-Stack and Open division. For more than two decades, Dave’s been recognized as one of the most accomplished and highly respected stock pistol competitors and trainers.

In the United States Practical Shooting Association (USPSA), Dave is a 13-Time National Champion in Production (6x), Limited-10 (4x), Limited (2x) and Single Stack divisions. He is the most accomplished competitor in USPSA history with an iron-sight striker-fired pistol, the most common choice among law abiding citizens who exercise their right to carry. He was the first to win Limited and L-10 divisions with double action striker pistols and remains the most accomplished in this category.

In International Practical Shooting Confederation (IPSC) World Shoot competition, Dave competed in three events making it to the podium each time. He has won individual Gold, Silver and Bronze medals along with a team Gold and two Silver medals in Production and Standard divisions. Dave scored three IPSC National wins and several prestigious international contests, including the Pan-American Championship. A mentally tough performer when the stakes are high, Dave’s career stats in the top matches speak for themselves: In IPSC/USPSA Level V (World) and IV (National) tournaments he has accumulated 18 wins, with multiple 2nd’s and 3rd’s.

In defensive pistol shooting sports, Dave won 9 of 11 entries at the IDPA Nationals, finishing 2nd in two other contests. Dave’s 2nd place finish at his debut IDPA Nationals was by a narrow .76 sec margin; he would come back the following year for a
decisive overall win. At the technical Light & Laser Invitational, Dave won this prestigious low-light, defensive style match
against a field of other skilled contenders with world recognition. At the Tactical Shooting Association inaugural, Dave won both Compact and Full-Size Pistol divisions.

During an abbreviated 2022 season, following a five-year absence from USPSA competition to recover from multiple surgeries, Dave won the USPSA Area 6 Championship in Single Stack. A month following and prior to a fourth surgery in under five-years, Dave finished 2nd Overall at the USPSA Single Stack Nationals. Dave shot both matches “clean” without a single miss or penalty. In 2021, Dave added a 3rd all-time Steel Master division, a three pistol aggregate of open rimfire, iron-sight centerfire and open centerfire pistol with a personal best 81.81 second score at the World Speed Shooting Championship. In 2020, Dave returned to Steel Challenge, following no competition activity the previous year, winning three championships including another Steel Challenge iron-sight world championship.

2022 marks the 19th year of Sevigny Performance, LLC where hundreds have trained with Dave and thousands have enjoyed the benefits of installing Sevigny Sights on their pistols. From his unparalleled accomplishments with Glock and FN pistols, building shooting skills with iron-sights and red-dot systems, winning with carry, single stack 1911 and double stack race guns, .22/.40/.45 ACP/38 SuperComp/9mm; Dave has the experience to set you on the right path, whether your goal is to be a competent recreational level or to win a world championship.

Dave Sevigny is a world champion and household name in shooting sports yet he continues to conduct himself as a regular guy, right where he began.  Polite, humble and committed to sharing his experience, you will find Dave mixing in with others anywhere he competes. Off the range, Dave is a follower of Jesus Christ, husband, father, outdoorsman and hockey player.