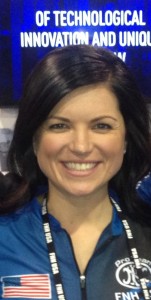 Brooke Sevigny is a Georgia native who was raised just south of Atlanta. She attended college in Columbus, Georgia and after graduating in 2008, took a job with a consulting firm to become a lobbyist.  Brooke lobbied for over two years in Atlanta before finding her life long passion, competitive shooting and meeting Dave Sevigny on a range in Georgia.

Brooke picked up a handgun for the first time in April 2011 and was introduced to shooting sports by her husband Dave Sevigny soon after. In her first few months of shooting, she learned basic skills training with a .22 Rimfire pistol and that same year placed in the top 10 overall at the World Steel Challenge Championship in Piru, California.  Later that year, Brooke moved into a 9mm “production style” pistol and entered into her first practical shooting event, the 2011 USPSA Nationals.

Brooke quickly classified as a “C” class shooter and in 2012 advanced into “B” class winning her first Ladies title in the Limited division at the Georgia State Steel Challenge Championship. In June she added another Ladies title in Open Rimfire at the Northeast Regional World Class Steel Championship. In Brooke’s first full season, she competed in IPSC, Steel Challenge and USPSA while managing over half a dozen different types of handguns and calibers.

In 2013, Brooke Sevigny left a trail of accomplishments beginning at the NRA Bianchi Cup, where she finished High Lady in the Metallic division, followed by two titles in Ladies Limited division at the Area 4 and Area 5 USPSA Championships. While Brooke enjoys competing in the Ladies category at matches, she prides herself in her overall finishes and results within her classification bracket. Brooke took 2nd “B” Class in Open at the 2013 Pro-Am Championship in Frostproof, Florida and finished 2nd in her class at Production Nationals.  Upon conclusion of the 2013 season, the United States Practical Shooting Association announced Brooke will represent the Team USA Ladies Standard division team for IPSC World Shoot XVII in October 2014.

Entering her third full season of competitive shooting in 2014, Brooke is now representing major companies including FN and GASTON J GLOCK style LP. Brooke has become a female ambassador to shooting sports and encourages all, men, women and children to learn about handguns, competition and firearm safety. When Brooke is not on the range she is assisting with Sevigny Performance and spends as much time as she can with her family.